And then there’s life.

I restored confession-box to a different webhost awhile ago, but struggled finding ways to resume where I’d left. It’s been four months since my last post. And no matter what I do, some of what follows will be a repetition for those that follow me on facebook – which is likely the majority. I’ll only brush surfaces here. I finished my degree programme at LJMU. Except for a work-based learning assignment that I’d carried over from last year. I had wanted to complete this by June, but it didn’t quite work out. I hope to have a place settled by the end of next week though – and this time things are more definite. My brother was over for a while in May, I was back home for a week end June/begining July. I moved at the end of June. Which means I have – for now – my own appartment, while only paying slightly more than I used to, before, for a sinle room.

Yes, all the houses surrounding it are boarded up, the one to the left obviously having been on fire once. Both neighbouring houses are occupied by birds and no-one else. And yes, it is in Kensington, though barely, and in one of the nicer parts. I tried finding something perfect before. And still only signed a contract for two months … but then. Ever since I left Sweden I’d wanted a place for myself again, only not being able to afford one. I have the option to extend the contract and well – maybe I should. The two rooms used to be rented out as two bedsits, so the appartment has two kitchens. The kind of slightly odd thing befitting me. Oh and K. lives upstairs from here.

And there’s things happening, have happened, will happen. Like. Last Monday: I extended my family. 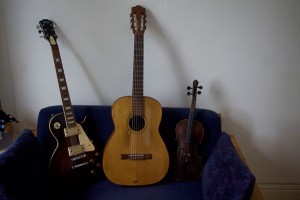 I saw it in a second hand shop for £79, and given the accoustic guitar I have is a Höhner, whose sound I love, I was more than just interested. Reading the only reviews available on the web I went for it. There’s not a lot of info around – all I know it’s been built in Korea sometime between 1988 and 1992. I tried it in the tiny store of Smithdown road that mostly sells second hand records from the mid 90s. They produced a small amp from somewhere – so I know it works – but I still need to get my own amplifier. I’ve put J. on the case, given she’s involved with the local musician scene. I have an amp back home at my parents, with my other e-guitar, but that’s a long way away. 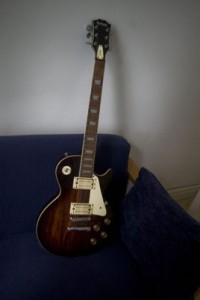 Walking out of the shop, guitar on my back in it’s carrying case, I took a trip to town, buying little necessities for my new home, and then to FACT when it started raining, for a tea, and out again over to chinatown, meandering through one of the supermarkets. I am not there often enough. It’s a sensory journey to another place. Upon leaving what was a drizzel before had turned into movie rain. Waiting in the entrance. Joined by a middle-aged Chinese, who barely spoke English, exchanging one-word sentences now and then, waiting, waiting, echos, silence, patience. Grace? One of the supermarket employees stepped out eventually telling us – first in Chinese, then in English, that they do sell umbrellas for a pound. I’d been walking through the store before, but didn’t spot them. Chinese Man bought two. I got one, but needed to pay with card – to the disdain of the store owner. Back out. The rain had intensified, coming in sideways with the wind. And we both waited. An Englishman stepped out, in suit and tie, turns around with a smile and walks into the inferno. I’d have to. I’d not have bothered getting an umbrella either, except for the guitar travelling with me.

Of course I was over cautious, as was clear once I’d actually made my way to the train station and back home. I own a green and yellow umbrella with a Tsingtao logo now. And I am somewhat sure they were meant to be promotional items rather than for sale.

Or Thursday night. When S. and me spent an evening in St. Lukes, the Bombed-Out Church, for “Ghost Stories: A Night Opera” (samples behind link), starting at sunset, ending two hours later. It rained. And, see above, the church has no roof. They sold plastic overcoats. Which meant close to 240 people were sitting in the rain in what looked like fashion inspired by Twelve Monkeys, listening to classic-style guitar music, set to a 2 hour video-installation, occasionally intersped by the accompaning opera singer “wailing” (as S. put it). That is – the guitar player was good, the singer likely too, but her non-verbal style vocal accompany left her with little to do. Most of the audience didn’t last all the way through.