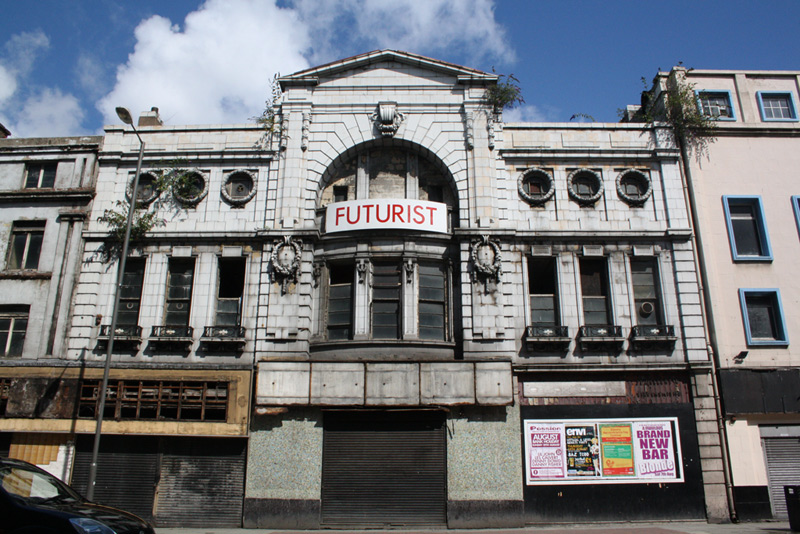 The Futurist (photo by Jackie Passmore)

The Futurist was Liverpool’s first custom built cinema, opened in 1912, and closed 1982. According to this BBC article it features a marble foyer, has a lift and was the first cinema to show films with sound (in Liverpool?). It is one of the many cinemas around the UK that were abandoned and just left to fall apart since.

It seems to be a magnificent building – both inside and out, but is in a quite awful state. It is apparently marked for demolition, but as so many buildings in Liverpool hasn’t been for years and years and years now. One of the reasons for demolition floating around the web is that supposedly its roof has collapsed. While there certainly are a number of quite enormous holes visible in the roof in this 2004 video, it doesn’t look so damaged that it is about to collapse completely.

Currently Liverpool has two big cinemas in the city centre. The newly built Odeon in Liverpool One – a big Hollywood style commercial cinema – and FACT’s Cinemas with a mixture of arthouse and more mainstream films. What Liverpool doesn’t have is a programme cinema, the type of cinema I like above all others.

There’s one, for example, not far from where my parents live, in Germany – a former Communist cinema in the backroom of a pub – that focuses on independent type movies and mostly takes them in at the end of their run, paying less in rent fees than if they’d aim for up-to-date or early release. What that cinema has is atmosphere, rather than high tech equipment. It’s in a 60s style that’s maintained on purpose; advertisements at the beginning of the movie mainly are simply slides (by now quite faded) of local business sponsors. It features two projection screens in different rooms, but has only one projection room, so the second screen is projected via a set of mirrors. It draws an audience that more mainstream venues don’t – it doesn’t make a lot of money, but enough to survive.

I would hope there’s room for a third cinema in the vain of independent cinemas within Liverpool city centre. So … here’s Project Dream #1: Restore and re-open the Futurist.

YORKIE:'Dust' Live At The Futurist

Given the damage and the state the building is in this is a mad-cap project from a financial perspective. It will not be a profitable thing to do, and would likely need millions and millions if tackled in the general way that restoration projects are done. This must be a not-for-profit and community / volunteering based project to get anywhere – and remain a not-for-profit venture should it ever reopen.

I don’t have any qualifications, whatesoever, to initiate a project like this. But that’s what actually makes me so interested in trying. What I do know is that similar projects have been started and have been successful elsewhere.1 I also know, since working with the Tanzania Book Project, that there’s a lot of surprising resources available in Liverpool if one just searches for them.

We needed, for example, a space to store the books we collected and struggled finding one. We eventually called into a talk show on the radio and were contacted by a Liverpool based industrialist who offered us to use one of his factories as a storage space free of charge. He had planned to sell it and actually de-listed and took it off the market, as we needed it for a whole year.

This is the first time I mention this idea to anyone or anywhere and there’s a lot of unknowns with this. But then all these uncertainties actually quite easily offer up an initial agenda.

1) Who owns the building. My hope would be that it is in City Council hands, rather then privately owned. This is one thing to chase up with the council.

2) How damaged is the building really? I’ve been trawling Urban Explorer communities, but while they certainly have the building on their list of places to examine, no-one’s gained access yet. But, given that a lot of Biennial activities over the years involved and used the building it should be possible to gain access and document. Someone with an idea of restoration that could assess and provide an initial opinion would be necessary. Even if this is the point at which the project is deemed impossible – I am sure this would be an exciting exploration opportunity that would result in nice photos / footage.

MADE UP | Gabriel Lester – site visit

3) How feasible is the project really? There’s a good number of non-profit organisations in Liverpool that work in the cultural sector, including the Bombed-Out church project that is probable the most similar idea. There’s potential to network here, but also the chance to learn from those other non-profit restoration projects I’ve linked to. Given that it is on Lime Street and right in the middle of the city centre certainly should be a positive aspect. This would need someone with marketing / market assessment knowledge.

4) What is the history of the building? I am sure there’s more to be dug up then the little that’s available on the web. From reading around there are certainly a lot of people out there reminiscing and  nostalgic about the cinema – so there’s potential out there to tap in and gain support. The more there is known about the building the easier it would be to make a case as for why it is worthwhile to restore.

5) Legalities. For a project like this to operate on a non-profit basis, the restored building certainly would have to abide by building and safety regulations, which quite likely have changed a lot since it was last used and accessible to the public. There’s the need to set up a non-profit organisation at the very easiest, and loads and loads of legal hurdles ahead.

6) Funding & Finances. No matter how much can be done via volunteering and general help (I am sure there’s a lot of building material and even machinery out there for very little) there will be needs for funds, eventually. While voluntary work can cover a lot, fixing the roof and similar difficult operations are likely outside what enthusiasm alone can do. There will be costs and if only for sending letters and buying stamps. So looking into opportunities – are there grants out there; are there organisations supporting restorations like these – are initial steps. As with anything, once plans are more definite, fund-raising activities and the like would come down the road. To be on proper footing someone with knowledge and experience of accounting would certainly be helpful.

There’s much, much more to be considered, of course, but – personally – I think all this needs as a start is a small team of people that are committed and want to suss out all these initial issues, draw up a plan and  then start working toward implementing it. I assume this to take decades, rather then years, to go from initial plan to finished restoration and reopening. I can guarantee a lot of setbacks, problems and headaches along the way. I promise it’ll be a lot of work for nothing. I know it is incredibly naive and insanely ambitious. I know it is absolutely stupid. I am sure there’s a huge chance that a project like this will fail in a massive manner.

If you were to ask me if I am serious about this the answer would be “no, I’m not”. Not at this point. But I am also quite aware that pretty much any successful restoration project like this started with someone saying “wouldn’t it be awesome if” and someone else responding “well let’s check it out”. I am very aware that for anything like this to happen a few people need to get together and think, discuss and research this, pretending that they actually are serious about it. It’s very likely it’s impossible to do. But it will be fun and exhilarating finding out.